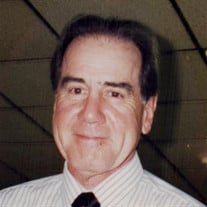 Douglas Dean “Pink” Armstrong 84 The Armstrong Family announces the passing of their father, Doug “Pink” Armstrong to splendid voyages through the many memories he shared with friends and family alike. He once again joins his former spouse, Barbara A. (Baker) Armstrong, who passed away two years prior, and leaves behind his best friend and life companion of 17 years, Pat Moore Driksna. Doug had the distinct pleasure of spending hospice in the home of his daughter Beth, and passed away 17 December 2018 while basking in the company of his children and grandchildren wishing him a peaceful slumber. Doug’s family will conduct a memorial service with military honors at Holihan-Atkin-Barclay Funeral Home in Grand Ledge, MI on Friday, the 21st of December at 1:00pm. Visitation will be Friday from 11:00am until the time of the service. The ceremony will be followed by an abbreviated graveside internment in nearby Oakwood Cemetery. Guests can either accompany Doug’s family to the cemetery, or meet them on their return at a Reception held at American Legion Post 48 in Grand Ledge. Doug was born in Lansing, MI on January 20, 1934 to Ernest E. and Ivy Marie Belle (North) Armstrong. He is survived by his brother Edward (Mike) Armstrong of Richmond, VA; and two sisters Bonnie Davison of Lansing, MI, and Martha (Marty) Shoemaker of Grand Ledge, MI. Doug was preceded in death by brothers Gilbert and Ron Armstrong. Doug reached for life’s enrichments through achievements of his nine children, Eric J. (Akiko) Armstrong stationed in Wiesbaden, Germany; Edward D. (Lot) Armstrong of Lansing, MI; Anne T. (Carl) Cranson of Lansing, MI; Beth L. Armstrong of Lansing, MI; Aaron M. Armstrong of Bozeman, MT; Brenna A. Armstrong (pre-deceased 1972); Brent T. Armstrong of Three Forks, MT; Douglas E. Armstrong of Bozeman, MT; and Noah A. Armstrong (pre-deceased 1976). He was also blessed with lots of love and joy shared among his 13 grandchildren and 13 great-grandchildren. Doug spent many years assisting his own children and others through his participation in local scouting, sports, and mentoring programs. His family asks that donations in Doug’s name be sent to the Grand Ledge Pony/Colt Baseball Program, P.O. Box 15, Grand Ledge, Michigan 48837 to continue their work fostering local youths in the enjoyment of America’s sport. Donations received will be used to assist in renovating facilities at the downtown Grand Ledge Sports Field in order that it continue as an avenue of entertainment for the City. The Armstrong family also wishes to send a special Thank You to the staff of Great Lakes Caring Hospice of East Lansing for their professional medical and in-home End of Life assistance provided during this sensitive period. Their level of experience, hard work and delightful attitude made this transition a smooth experience for both Doug and his entire family.

The family of Douglas Dean Armstrong created this Life Tributes page to make it easy to share your memories.

Send flowers to the Armstrong family.