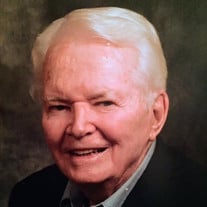 Donald Lee Rinckey was born to Arthur and Vera (Hamilton) Rinckey on December 19, 1923, in Elwell, Michigan and passed away March 6, 2018. He was beloved brother to Carl, Doris, Marion, and Millie. After finishing his schooling, Don started his entrepreneurial journey that would last over six decades. From working for the CCCs during his youth, to owning several construction companies and awholesale pet supply distribution business, Don took pride in honesty. “I never had a customer I couldn’t look in the eye and shake his hand.” Don met and married the love of his life, Christine Ford, in Muskegon, Michigan, in 1944, right before he enlisted in the Army, where he served during WWII. They had four children: Judy (Frank) LaFay, Dennis (deceased), David (Barb) Rinckey and Debbie (Mark) Roberts. Don and Chris were devoted to each other and their family. Their journey together of over 55 years included travel, cottages, winters in Florida and lots of cherished friendships together. During their marriage they never stopped laughing and enjoying each other’s company until Chris passed away July 3, 2000. Throughout Don’s life, he was an avid outdoorsman, especially enjoying hunting and fishing of all kinds. He never missed an opportunity to tell a story about the “one that got away.” He also loved sports, especially his Detroit Tigers. Throughout his life, Don prided himself in being connected to his friends and family and even at 94 years old, he was emailing jokes, using Facebook and texting. He was a charter member of Calvary Lutheran Church in Lansing and more recently a member of Immanuel Lutheran Church in Grand Ledge. Don has 7 grandchildren: Dominic LaFay, Michael LaFay, Matthew (Nicki) Rinckey, Jill Rinckey, B.J. (Lacy) Roberts, Sarah Roberts (J.R.), and Rebecca Roberts. He also has 15 great-grandchildren, 1 great-great grandchild and they will all miss everything from his pancakes and chicken casserole to his thoughtful birthday cards. A funeral service will be held Saturday, March 10, 2018, 11:00 a.m. at Immanuel Lutheran Church, Grand Ledge, with Pastor Chuck Foerster, officiating. Interment will follow with military honors at Wacousta Cemetery. Visitation will be Friday from 5-8:00 p.m. at the Holihan-Atkin-Barclay Funeral Home, Grand Ledge, and Saturday at the church from 10-11:00 a.m. The family would like to thank the entire staff at Independence Village of Grand Ledge and Compassus Hospice for their compassionate and loving care. In lieu of flowers, memorial contributions may be given to Compassus Hospice, 801 S. Waverly Road, Lansing, Michigan 48917 or Independence Village of Grand Ledge Activity Fund, 4775 Village Drive, Grand Ledge, Michigan 48837.

Donald Lee Rinckey was born to Arthur and Vera (Hamilton) Rinckey on December 19, 1923, in Elwell, Michigan and passed away March 6, 2018. He was beloved brother to Carl, Doris, Marion, and Millie. After finishing his schooling, Don started... View Obituary & Service Information

The family of Donald L. Rinckey created this Life Tributes page to make it easy to share your memories.

Send flowers to the Rinckey family.