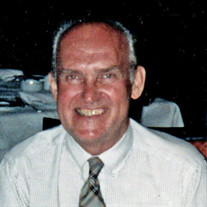 Donald William Garnett, longtime Grand Ledge resident, passed away on June 25, 2018. Don was a loving father, grandfather and friend who will be missed by the many lives he touched. Don enjoyed connecting with his many friends and neighbors in the community. Don was born on June 17, 1922 in Morley, Michigan to the late George H. and Elspeth “Elsie” A. (Scott) Garnett. He graduated from Morley High School in 1939 as Valedictorian and went on to graduate with high honors from MSU. Don proudly served in the United States Marine Corps during WWII in the South Pacific and Asia. Don retired from Olofsson Corporation as a Mechanical Engineer holding numerous patents. He was very talented and artistic, which he expressed in his woodworking, masonry work and the many impressive wood carvings he created. Don used many of these skills while building his Grand Ledge home in the 1950s. Don and his wife traveled internationally and throughout the United States. The Garnetts also co-founded and were members of the Grand Ledge Twilighters Square Dance Club for more than thirty years. Don is survived by his four children, Linda (Gary) Kawula, Wendy (Mark) Rennhack, Nancy (Bill) Huver and Mark (Dawn) Garnett; eight grandchildren, Stacy Kawula, Adam (Michelle) Kawula, Philip (Ashley) Rennhack, Andrew (Claire) Rennhack, Erika (Geoff) Morris, Aaron (Kaylie) Huver, Whitney Huver and Tony Garnett; and nine great grandchildren. He was preceded in death by his beloved wife Muriel (Sida) on September 2, 2013; sister, Annie Jane “Marie” Browers and brother, Bertram George Garnett. The family will receive friends Friday, July 6, 2018, from 2:00 p.m. until the time of the memorial service at 3:00 p.m. at the Holihan-Atkin-Barclay Funeral Home in Grand Ledge. Memorial contributions may be given to the American Diabetes Association 20700 Civic Center Drive, Suite 100, Southfield, Michigan 48076 or the Sparrow Foundation, Hospice House of Mid-Michigan 1110 E. Michigan Avenue, P.O. Box 30480, Lansing, Michigan 48909.

Donald William Garnett, longtime Grand Ledge resident, passed away on June 25, 2018. Don was a loving father, grandfather and friend who will be missed by the many lives he touched. Don enjoyed connecting with his many friends and neighbors... View Obituary & Service Information

The family of Donald William Garnett created this Life Tributes page to make it easy to share your memories.

Send flowers to the Garnett family.