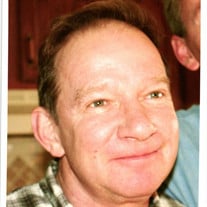 Don Allen Sieffert born March 18, 1946 in Traverse City, MI, passed away Sunday, November 13, 2016 @ Sparrow Hospital surrounded by family. Don grew up in Remus, MI where he enjoyed hunting& fishing with his brothers and friends. He served in the Air Force as a jet-engine mechanic. He moved to Grand Ledge in 1966 and worked at General Motors and retired in 1998 with 33 years of service. He enjoyed hunting, cooking, growing hot peppers and spending time with family. He would go out of his way to help anyone and everyone however he could.He always put others before himself. He is preceded in death by his mother and father, Charles & Berneice Sieffert, brother Gordon Sieffert, sister-in-law Susan& nephew Brian Sieffert. He is survived by his wife Judith (Casper) Sieffert of 50 years, two children, daughter, Melinda (John) Thompson of Grand Ledge and son Scott (Janel) Sieffert of Howard City, MI, four grandchildren Nick Thompson, Alexis Thompson, Alivia Sieffert & Leah Sieffert. His two brothers Ronald Sieffert and David (Bonnie) Sieffert both of Remus, MI. and numerous nieces & nephews. A Mass of Christian Burial will be celebrated Friday, November 18, 2016, 11 am at St. Michael Catholic Church, Grand Ledge by The Reverend Fr. James Eisele. Rite of Committal at Oakwood Cemetery will follow a luncheon at the church. Visitation will be Thursday from 3-6 pm at Holihan-Atkin-Barclay Funeral Home, Grand Ledge and Friday from 10-11 am at the church. Memorial contributions may be given to St. Michael Parish, 345 Edwards Street, Grand Ledge, Michigan 48837 or the American Cancer Society, Mid-Michigan Office, 1755 Abbey Road, East lansing, Michigan 48823.

The family of Don Allen Sieffert created this Life Tributes page to make it easy to share your memories.

Send flowers to the Sieffert family.