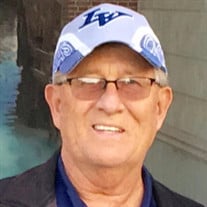 Dennis Leon Huhn, age 67, of Grand Ledge Michigan went to be with the lord on Tuesday, February 16th, 2021. Dennis was born in September of 1953 to the late Gerald and Elizabeth (Gensterblum) Huhn. He graduated from Portland High School, Class... View Obituary & Service Information

The family of Dennis Leon Huhn created this Life Tributes page to make it easy to share your memories.

Send flowers to the Huhn family.