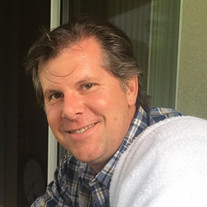 Daniel Vincent Frazier was born August 18, 1968 in Grand Rapids, MI. to his proud parents, Michael and Patricia (Brinker) Frazier. He was blessed to be raised in the rural outskirts of Sunfield, MI where he graduated from Lakewood High School in 1986. He married his high school sweetheart, Kimberly Vetter, in 1989 and celebrated 31 years together. Dan was a patriot who deeply loved his country. Enlisting in the United States Army in 1989, he volunteered for airborne school and was assigned to The 3rd Battalion A Company, 75th Ranger Regiment. In 1989, Dan participated in the aerial invasion of Panama during “Operation Just Cause.” During this course of military action against a determined enemy, Dan earned the highly coveted Combat Infantryman's Badge and the Armed Expeditionary Medal with an Arrowhead device. Dan later became a member of the Michigan National Guard while obtaining a degree in Business Management. As a Second Lieutenant in the United States Army, Dan was stationed at Fort Polk, LA. as a logistics officer from 1996 until he left the military in 2000. He was currently a regional area manager for Johnson Controls and formerly a Detroit Branch Manager for York HVAC, as well as a supervisor at General Motors, and a territory manager at Lennox. He is survived by his wife, Kimberly, son, Zachary (Abbey) Frazier and grand-daughter Isla, of Golden, Co., daughters, Kelsey Frazier of Grand Ledge & Katherine (Fiance’ Kyle Wilson) Frazier of Pittsburgh, PA. Also surviving are his parents Michael and Patricia Frazier of Spanish Fort, AL., brother, Joseph (Barbara) Frazier, of Grand Ledge, MI. In-laws, Diane Pirfo of Washington D.C., Clifford and Lory Vetter of Sunfield, MI, brother-in-law, Justin Vetter of Kalamazoo, MI and many beloved nieces and nephews. Dan was a devoted husband and father, a loving son and beloved brother. He was a great friend and support to many. The world is a better place because of the life of Daniel Frazier. His witness of faith, sense of humor, wit, energy, story telling, kindness and consideration to others will be deeply missed. A Mass of Christian Burial will be celebrated on Friday, May 21, 2021, 11:00 am at St. Michael Catholic Church, Grand Ledge by The Reverend Fr. James Eisele. You may watch the funeral mass for Dan at 11:00 am Friday on the St. Michael Church YouTube channel at this link:https://www.youtube.com/watch?v=fAG2S4A7q9E. Rite of Committal will follow with military honors at Oakwood Cemetery. Visitation will be Thursday from 3-8:00 pm at the Holihan-Atkin-Barclay Funeral Home, Grand Ledge with a Scripture Service at 7:30 pm and at the church Friday from 10-11:00 am. Covid protocols requiring social distancing and capacity limitations will be observed.

Daniel Vincent Frazier was born August 18, 1968 in Grand Rapids, MI. to his proud parents, Michael and Patricia (Brinker) Frazier. He was blessed to be raised in the rural outskirts of Sunfield, MI where he graduated from Lakewood High School... View Obituary & Service Information

The family of Daniel Vincent Frazier created this Life Tributes page to make it easy to share your memories.

Send flowers to the Frazier family.