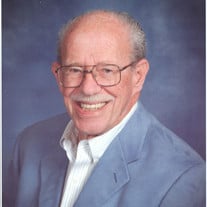 Clio Frank “Bud” Sanborn, 87, passed away February 22, 2018 at his home surrounded by his family. Born May 19, 1930 to Clio Stanley and Margaret (Thorn) Sanborn, Bud grew up in Lansing, listening to the lions roar at Potter Park from his bedroom. He graduated from Eastern High School in 1948. A tuba player, he attended Michigan State College on a full music scholarship awarded to him by Leonard Falcone, graduating with a degree in physics. In 1952, Bud began work at GM Research working with high temperature fatigue studies for gas turbine engines. In 1954, he was drafted into the Army and was stationed at Dugway Proving Grounds in Utah for 2 years. Following his discharge, he was transferred to Oldsmobile where he worked in Advance Design and became a supervisor of the Engineering Computer Applications Group. Bud also worked in Vehicle Simulation studies and in the Analytical Design Analysis Group. He retired in 1987 following 35 years of service. Bud was a longtime member of Haslett Community Church. It was there he met Barbara Kilmer. They were married on May 31, 1986. During their marriage, they traveled extensively before settling at Live Oak RV Park in Arcadia, Florida, their winter home for the past 21 years. Bud was a passionate photographer, spending many hours in his darkroom. He is survived by his wife of 31 years, Barbara. Children, Rebecca (Daniel) Esch of Howell; Frank (Marie) Sanborn of Charlotte; Amy (Bill) Bishop of Milford. Children by marriage, Kathryn (William) Witchell of St. Johns and Kenneth Kilmer of Grand Ledge. Grandchildren, Katie Esch (Nick VandeBerg) of Fenton; Jennifer Esch of Howell; James (Allyn) Witchell of Detroit; Brooke Witchell of Billings, MT; Ryan Logan of Charlotte; and Jessica (Michael) Prieskorn of Livonia. Great grandson, Mikey Prieskorn. Sister-in-law Valerie Smith of Hope; Kay Kilmer of East Lansing and nieces, Kitty McFadden, Cheryl Griffith and Judy McFadden. He was predeceased by his parents, his sister, Jessie McFadden, brothers-in-law, Lester McFadden and Jim Dobben. A Celebration of Bud’s Life will be held on Saturday, March 3, 2018, 3:00 p.m. at the Holihan-Atkin-Barclay Funeral Home & Cremation Services, Grand Ledge. Memorial gathering will be immediately before the service from 1:00-3:00 p.m. His family requests memorials contributions be given to the Center for the Needy, 163 S. Orange Avenue, Arcadia, FL 34265.

The family of Clio "Bud' Frank Sanborn created this Life Tributes page to make it easy to share your memories.

Send flowers to the Sanborn family.