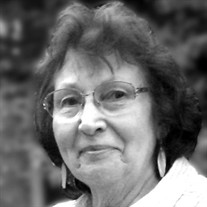 Clarice “Clare” Estelle Chopp, 85 of Grand Ledge, passed away peacefully on November 6, 2015. She was born on February 25, 1930 to Joseph and Rose Rauch of Calumet, Michigan. She graduated from Sacred Heart Catholic High School in 1948 and was employed by the Michigan Bell Telephone and Calumet & Hecla Mining companies in the years immediately following graduation. Clare was a devoted, unselfish mother who truly enjoyed raising her five sons. She dedicated her time and energy to her family instead of pursuing a career outside of the home. She relished spending time with her family and grandchildren. She had a strong faith in the Lord and was a devout Catholic. Clare appreciated the simple things in life and was always giving of herself and never expected anything in return. Her hobbies included growing plants and flowers (especially red roses) and bird watching (hummingbirds were her favorite). She is preceded in death by Bob, her husband of more than 55 years, her sisters Helen “Honey” Kelly and Emma Rauch (Sister Ricarda), and her brother Richard Rauch. She is survived by her five sons and eight grandchildren, Gary (Vanessa)- Spencer and Myra, great granddaughter Astrid; Dennis- Lauren Renee, Garett, and Gabe; Rob (Laura); Kevin (Kelly)- Alex and Justin; and Greg (Lisa); numerous nieces and nephews, and her beloved siblings Jean Rauch, Elmer Rauch, Jackie Rauch, Max Rauch, Fred Rauch, Florian Rauch and their families. Visitation will be Tuesday, November 10, 2015 from 11:30am until the time of the Funeral Mass at 1pm at the St. Gerard Catholic Church, 4437 W. Willow Hwy, Lansing Michigan with Rev. Fr. John Klein officiating. Those desiring may request Holy Masses in Clare’s name, or make a donation to the St. Gerard Catholic Church. A grave site service will be held at Lakeview Cemetery in Calumet, Michigan on Friday, November 13 at 11am. Arrangements by and for more information, contact the Holihan-Atkin-Barclay Funeral Home in Grand Ledge, Michigan.

The family of Clarice E. Chopp created this Life Tributes page to make it easy to share your memories.

Send flowers to the Chopp family.