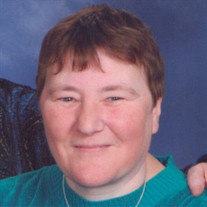 Christine L. Haeck of Delta Township passed away August 12, 2017. Christine was a loving daughter, sister, aunt and friend and will be greatly missed. Christine was born February 16, 1959 in Lansing, Michigan to Henry M. and Palmyre C. (Mortier) Haeck. She graduated from Grand Ledge High School Class of 1978. Christine was such a joyful and friendly person, who easily connected with people and made new friends wherever she went. One of her favorite songs was, “You Are My Sunshine”, which rightly earned her the nickname of “sunshine”. She loved children and had the special ability to connect with the elderly. She was always looking for ways to be helpful and was a true blessing to those around her. Christine also loved and enjoyed all animals. She is survived by her mother, Palmyre C.; siblings, Marianne J. (Jerold “Buzz”) Baird and Daniel R. (Diane) Haeck; nieces and nephews, Eric (Angela) Haeck, April Haeck, Natallie (Grant) Simpson, Eric J. (Beetna) Baird, Matthew S. (Gina Childs) Baird and Ryan A. (Nicole) Baird, along with numerous great nieces and nephews. Christine was preceded in death by her father, Henry, on January 8, 2010. A Mass of Christian Burial will be celebrated on Wednesday, August 16, 2017, at 11:00 a.m. at St. Michael Catholic Church, Grand Ledge by The Reverend Fr. James Eisele. Rite of Committal will follow at Delta Center Cemetery. Visitation will be Tuesday, August 15, 2017, from 5:00-8:00 p.m. with a Scripture service at 8:00 p.m. at the Holihan-Atkin-Barclay Funeral Home & Cremation Services, Grand Ledge. Memorial contributions may be given to St. Michael Parish, 345 Edwards Street, Grand Ledge, MI 48837 or Great Lakes Caring Hospice, 900 Cooper Street, Jackson, MI 49202. Share your memories and condolences online at www.holihanatkin.com

The family of Christine L. Haeck created this Life Tributes page to make it easy to share your memories.

Send flowers to the Haeck family.