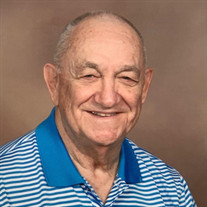 On March 16, 2022, God called Charlie (AKA Danny) and he peacefully went home to be with our Lord with his loving family by his side. He was born August 24, 1937, in Lansing to Richard and Winifred (Bunn) Gill. Charlie was preceded in death by his parents, his beloved wife Patty Jean Gill; his sons Don Harley Jr, Tom Harley, and Paul Gill along with his brother Eugene R. Gill and sisters Mary (Wendell) Clinton and Suzanne (Larry) Lucas. Charlie is survived by his siblings Raymond (Martha) Gill, Melanie Miller, and Rene’ Gill; his daughters, Theresa (Bill) Jackson, Shari (Dave) Carrol and Jan (Tom) Theis, his daughters-in-law Eadie Harley, Mary Harley, Leslie Gill and his many beloved grandchildren, great grandchildren, and great-great grandchildren. Also surviving is his dear friend Bobbi Baker and her family. At seventeen Charlie enlisted in the United States Navy and served for three years before joining the inactive reserves. He worked briefly for Fisher-Body and the US Postal Service before reenlisting and proudly devoting his life to distinguished service in the Navy that spanned over 30 years. Charlie entered the Electronics Training Program followed by a lasting career in Special Communications. He had many duty stations all over the globe including Washington, DC., several stateside tours, the USS Sperry in the mid 50’s and the USS Independence in the 60’s where they served off the coast of Cuba during the Cuban Missile Crisis. Other than being in the continental United States his tours of duty included Ethiopia, Iceland, Guam, Hawaii, and Adak where he was involved in sending and receiving signals to guide our submarine fleet during the Cold War. He was a man who loved God, his country, and his family. He met the love of his life, Pat, in Grand Ledge while staying with his sister, Mary, and her family when he was on leave. They were married in August 1970 and together they enjoyed many years of travel beginning with his duty station in Iceland. Later, while stationed in Virginia he received his GED and earned two Associate Degrees from Northern Virginia Community College. Charlie always dreamed of living near the water. After retiring in 1988 as a Senior Chief Petty Officer, he and Pat moved to their home on Big Lake where they lived for 25 years. It was a very special place where he loved to spend time with his family and friends. Many laughs were had, and many wonderful memories were made. A Mass of Christian Burial will be celebrated on Saturday, March 19, 2022, 11:00 am at St. Michael Catholic Church, Grand Ledge by Father James Eisele. You may watch the funeral mass for Charlie at 11:00 am Saturday on the St. Michael Church YouTube channel at this link: https://www.youtube.com/watch?v=WrnHJQtiwuc. Rite of Committal will follow with Military Honors at Oakwood Cemetery. Visitation will be at the church Saturday from 10-11:00 am. Memorial contributions in Charlie’s name may be made to St. Michael Catholic Church, 345 Edwards Street, Grand Ledge, Michigan 48837 or to Sparrow Foundation, Hospice House of Mid-Michigan, 1215 E. Michigan Avenue, Lansing, Michigan 48912-9907 (https://secure.qgiv.com/for/spaheasys/).

On March 16, 2022, God called Charlie (AKA Danny) and he peacefully went home to be with our Lord with his loving family by his side. He was born August 24, 1937, in Lansing to Richard and Winifred (Bunn) Gill. Charlie was preceded in death... View Obituary & Service Information

The family of Charles Daniel Gill created this Life Tributes page to make it easy to share your memories.

Send flowers to the Gill family.