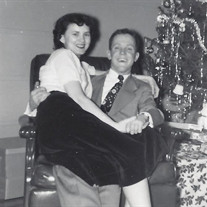 Carolyn Jean Ward May 18, 1930 &#8211; December 21, 2016 Carolyn Jean Ward, age 86, wife of William E. Ward, always lived in the image of Christ and is now surrounded by Christ and her loved ones in heaven. Carolyn went to her Heavenly Father... View Obituary & Service Information

The family of Carolyn Jean Ward created this Life Tributes page to make it easy to share your memories.

Send flowers to the Ward family.