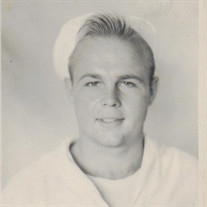 Calvin Hildenbrand Grand Ledge, Michigan March 10, 1927 March 10, 2019 Calvin “Cal” Hildenbrand passed away on Sunday, March 10, 2019 in Grand Ledge, the day of his 92nd birthday. Cal was born to Ben and Maggie (Miller) Hildenbrand in the small town of Lehr, North Dakota. In 1936, at age nine, his family bought a trailer, packed up their belongings, and moved to Lansing in hopes of a better life in the booming city. Lansing provided just that for him and his family. He graduated from J.W. Sexton High School in 1945. He enlisted in the U.S. Navy and served his country in WW II in the Pacific Theater on the USS LST-800 ship. Upon returning to Michigan he met Ann Marie Borchert and the two were married on December 31, 1948 in Angola, Indiana. Together they had three children. He was member of the Emanuel First Evangelical Lutheran Church for over 60 years. Cal joined the Lansing Fire Department in 1951 and rose to the rank of deputy chief before his retirement in 1983. Always a hard and dedicated worker, he also built or oversaw the construction of hundreds of homes in the Lansing area throughout his life. Cal was preceded in death by his wife, Ann, in 2005; daughter, Rebecca, in 1999; brother Vernon, in 2016; and a brother (James) and sister (Alice) who both died in infancy. He is survived by his daughter, Lynn (Michael) O’Berry of DeWitt; son Paul (Philip Rugel) of Kalamazoo; granddaughters Faye Hildenbrand of Lansing and Caitlyn O’Berry of Holt; two great-grandchildren, Christian and Elaine Hildenbrand; and brother, Elmer, of Skandia, Michigan. A graveside service with military honors will be held at the Delta Center Cemetery on Thursday, March 14, at 1 p.m. Pastor Roy Atherton, Grand Ledge Fire Department Chaplain, will officiate. In lieu of flowers, the family asks that those wanting to make donations to the Lansing Community College Fire Science Program, 309 N. Washington Square, Suite 201, Lansing, Michigan 48933. Arrangements by the Holihan-Atkin-Barclay Funeral Home, Grand Ledge.

The family of Calvin Hildenbrand created this Life Tributes page to make it easy to share your memories.

Send flowers to the Hildenbrand family.