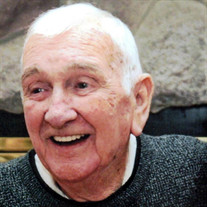 Bobby (Bob) J. Bryant passed away peacefully on April 27th, 2021 at his Independence Village home in Grand Ledge, MI. Bob was born on December 11, 1931 to Thomas and Emma (Ragan) Bryant. He graduated from Centrailia (IL) High School in 1950 and then enlisted in the Army. He served for 3 years during the Korean Conflict and was stationed in Germany for most of that time. He married Dolores Purcell on November 20, 1953 and they enjoyed 67 years of marriage. Bob attended Southern Illinois University after they married. A 1959 job transfer with Schlumberger brought the couple and their two young children to Michigan, and also brought many lifelong friendships. Bob later worked for several years as the superintendent of the Lansing Township Water Department, and was the co-founder of Michigan Watermain Testing in 1976. Bob was kind to all, and was known for his quick wit. He loved music, reading, fishing and gardening, and most of all, his family. Bob is survived by his wife Dolores, his children: Mona (James) Tropf, Melinda (Dewey) Charter, and James (Scherrie) Bryant, his grandchildren: Joshua, James, Luke, Jacob, Matthew, Lindsay and Kathryn, his great-grandchildren: Celia, Bailey, Ella, Marley, Layla, Dominic, Avery, Preston and Luna, his sisters: Beverly Partridge and Betty (Dan) Hizer, and several in-laws, nieces and nephews. He was preceded in death by his parents, his brothers: Phoy (Bud), William and Duane, and two sisters: Janice and Millie Jean. The family wishes to thank the Laurus Hospice staff, and everyone at Independence Village for their care and compassion. Due to Covid, a private military graveside service for the family is planned, and Bob’s son and grandsons will be his honorary pallbearers. In lieu of flowers, anyone wishing to make a donation in Bob’s memory is asked to consider Laurus Hospice, 950 Corporate Office Drive, Milford, Michigan 48381 or Community Baptist Church, 7832 W. Mt. Hope Highway, Grand Ledge, Michigan 48837. Bob loved the Lord, and he appreciated the comforting care of Pastor Timothy Jackson. Arrangements by the Holihan-Atkin-Barclay Funeral Home, Grand Ledge. Share your memories and condolences online at www.holihanatkin.com

The family of Bobby Joe Bryant created this Life Tributes page to make it easy to share your memories.

Send flowers to the Bryant family.