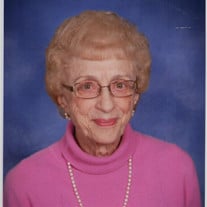 Beverly June Stevenson, (88) of Grand Ledge, Michigan, died July 14, 2019. She was born in Detroit on October 21, 1930 to the late Earl Berry and the late Leone (Huggler) Berry. She attended the Detroit Public schools and graduated from Edwin Denby High School. On February 24, 1951, Beverly and John S. Stevenson were married. Their first home was in Harper Woods and she and John had four sons. She was active in the Boy Scouts and PTA at Poupard school. They resided in Grosse Pointe Shores for 37 years. Beverly was proud to be a wife, mother and grandmother. She was an efficient homemaker and loved to entertain. Her favorite pastimes were reading and counted cross stitch. For many years, she was a volunteer for the American Red Cross. A long time member of Yachtswomen, she served as President, as well as varied offices. For over forty years, she was a member of Presbyterian Women’s Association and was a past president and served in other capacities. In 1992, Beverly and her husband John became members of Grosse Pointe Memorial Church. Inurnment will be in the church columbarium. Mrs. Stevenson is survived by her sons Mark R. (Martha) of Palo Alto, California, Scott T. (Deborah) of Grand Ledge, Michigan, and Dean A. (Sarah) of the City of Grosse Pointe; her adored granddaughters Ashley, Lauren, Michelle, Kara, Claire and Hannah. She was predeceased by her husband John S., her son John, and brother Calvin E. Berry of Genessee, Michigan. In lieu of flowers, memorials to The Capuchins, 1820 Mt. Elliot, Detroit, Michigan 48207 (https://www.thecapuchins.org/donate) or Grosse Pointe Memorial Church, 16 Lakeshore Drive, Grosse Pointe, Michigan 48236 (https://www.sagepayments.net/eftcart/forms/donate.asp?M_id=844438631274) would be appreciated. Arrangements by the Holihan-Atkin-Barclay Funeral Home, Grand Ledge

Beverly June Stevenson, (88) of Grand Ledge, Michigan, died July 14, 2019. She was born in Detroit on October 21, 1930 to the late Earl Berry and the late Leone (Huggler) Berry. She attended the Detroit Public schools and graduated from Edwin... View Obituary & Service Information

The family of Beverly June Stevenson created this Life Tributes page to make it easy to share your memories.

Send flowers to the Stevenson family.