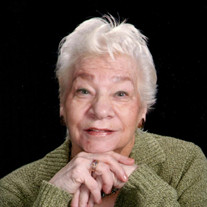 Barbara (Baker) Armstrong age 78 The Armstrong Family would like to announce that Barbara Anne (Baker) Armstrong, their beloved mother, has passed through the heavenly gates of Glory from her daughter’s home in Lansing, Michigan. Her brother Steven, several children, grandchildren, and former husband of 30+ years Douglas D. "Pink" Armstrong were at her side. Barb embarked on her glorious journey at 6:06pm on the 25th of April 2017, and a graveside service will be held at Oakwood Cemetery in Grand Ledge, MI on Monday, the 1st of May at 11:00am. Barb was born in Grand Ledge, MI on August 12, 1938 to Elmer F. and Dorothea "Dorothy" (Bohr) Baker. She is survived by four brothers Richard (Dick) Baker of Enolia, MO; Harry Baker of Grand Ledge, MI; Daniel Baker of Lake City, MI; and Steven Baker of Lansing, MI. Barb's greatest achievement is being the proud mother of nine children, Eric J. (Akiko) Armstrong stationed in Wiesbaden, Germany; Edward D. (Lot) Armstrong of Lansing, MI; Anne T. (Carl) Cranson of Grand Ledge, MI; Beth L. Armstrong of Lansing, MI; Aaron M. Armstrong of Lewistown, MT; Brenna A. Armstrong (pre-deceased 1972); Brent T. Armstrong of Three Forks, MT; Douglas E. Armstrong of Bozeman, MT; and Noah A. Armstrong (pre-deceased 1976). She has also basked heavily within the love and joy of her 13 grandchildren and 12 great grandchildren. Her love of babies and children is evident by the many years she spent assisting young women with their pregnancies while working at Hannah's House, Inc. Her family asks that donations in Barbara's name be sent to Hannah's House (www.Hannahshouselansing.org) to continue their work helping young adults and their babies through difficult times. The Armstrong family also wishes to send a special Thank You to the staff of Senior Community Care of Michigan PACE for their professional medical and in-home End of Life assistance provided during this sensitive period. Their level of experience, hard work and humorous attitude made this transition a smooth experience for both Barb and her entire family. Immediately following the graveside service there will be a reception at the Log Jam in Grand Ledge. Arrangements by the Holihan-Atkin-Barclay Funeral Home, Grand Ledge.

Barbara (Baker) Armstrong age 78 The Armstrong Family would like to announce that Barbara Anne (Baker) Armstrong, their beloved mother, has passed through the heavenly gates of Glory from her daughter&#8217;s home in Lansing, Michigan. Her... View Obituary & Service Information

The family of Barbara A. Armstrong created this Life Tributes page to make it easy to share your memories.

The Armstrong Family would...

Send flowers to the Armstrong family.