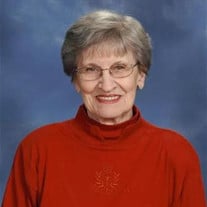 Arlene M. Koster age 88 of Grand Ledge passed away March 3, 2017. She was born July 30, 1928 in Westphalia to the late Robert and Adeline (Bohr) Platte. She retired from St. Lawrence Hospital and was a longtime faithful active member of St.... View Obituary & Service Information

The family of Arlene Mary Koster created this Life Tributes page to make it easy to share your memories.

Send flowers to the Koster family.